Granting a good night sleep with best innovations and technologies 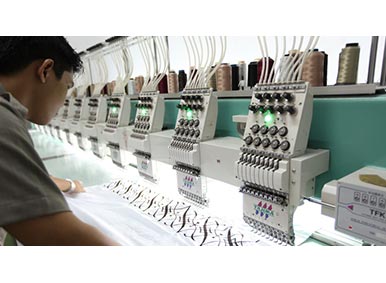 In the beginning, PT Duta Abadi Primantara came up with the idea of developing a product that is important and crucial for daily life, that also can be developed into premium products. It is only a matter of time until PT DAP found the idea and opportunity to build a premium mattress to meet the demand of high quality sleep, since people spend 1/3 of their lives on their beds.

Currently, PT Duta Abadi Primantara has 14 branches throughout Indonesia and hold licenses for some of the best leading mattress brand in the world such as Aireloom®, King Koil®, Serta®, and Tempur®. We hold exclusive licenses not only in Indonesia, but also some countries in the South East Asia such as Singapore, Malaysia, China, Vietnam, Phillipines and Thailand.

Customer Satisfaction has become the main important issue that PT Duta Abadi Primantara want to carry along the journey. They enhances the Customer Relationship Management and Human Resources Development by continuously improving their after-sales service. PT DAP keenly aware that one of the reasons for the company's success is good after-sales service. A comprehensive customer satisfaction is a priority for PT Duta Abadi Primantara. 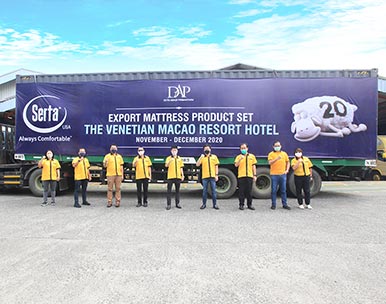 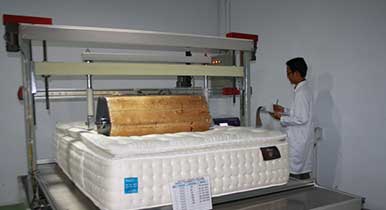 PT DAP was established as a bedding product company to manufacture and distribute Florence® brand mattress. Florence® was the first brand that PT DAP has ever owned to serve the market's demand of high quality mattresses.

PT DAP acquired the exclusive license of King Koil® from King Koil® USA. At its first arrival in Indonesia, King Koil® was soon well received by many consumers. Now, King Koil® dominates the Indonesian premium market segment and has a market share of around 40%.

King Koil® has become the only mattress manufacturer in the world that is certified and fully endorsed by ICA (International Chiropractic Association).

PT DAP obtained the exclusive license of Serta® brand from Serta® USA. Nowadays, the Serta brand has a market share of around 30% in the premium Indonesian market segment. PT DAP also acquired the license of King Koil® brand for the People's Republic of China, King Koil® Shanghai was established as a joint venture to manufacture, distribute, and market the King Koil® brand in mainland China.

PT DAP obtained the license of Serta® International Pte. Ltd, to market and distribute Serta® brand in Singapore. Serta® brand are very much well-accepted in the country and has become one of the best selling mattresses in Singapore.

PT DAP becomes the sole distributor of Tempur® brand in Indonesia. Known globally as the only mattress approved by the NASA, Tempur® was quickly accepted in the country. It was truly a privilege for PT DAP to hold such a big license name in their brand lineups, to meet all the market's demand of high quality mattresses.

TOB start - DAP Plant Tangerang expands its facility for bedding accessories and bed linen. The expansion is in the form of moving to a wider new area, the addition of new machines to support the demand for the bedding accessories quality improvement.

PT DAP obtained the license for Serta® Malaysia and was appointed as sublicense to manufacture, distribute and market Serta® branded products in Malaysia. By this time, PT DAP has acquired 3 licenses of Serta® International in Indonesia, Singapore, and Malaysia.

PT DAP acquires the exclusive license of Aireloom® mattresses for Indonesia, Malaysia, Singapore, China, Vietnam and the Philippines. PT DAP is very proud to be chosen as the trusted distributor in many Asian countries. Aireloom® mattresses are aimed to meet the upper class market needs.

RnD (Lab) Facility - Research and Development Lab Facilities has been built, the facility is accommodated by various new machines such as Durability Mattress Tester, Tensile Strength Machine, Taber Fabric Abrasion Tester, and many more, for testing purposes to ensure that every product made has been through various tests, to improve quality and required standards.

New Mattress Production Facility - Mattress Production Facility expansion, with the addition of expanding the factory area as well as providing new machines with the latest technology. The increasing technological development especially in the mattress industry, requires us to continue providing mattresses with the most up-to-date machinery. The use of this automation also help to innovate and improve on the mattress production.

Pioneer Rolled Packed Mattress in Indonesia - As a pioneer of mattress in the box, in 2017 DAP launched the first rolled pack mattress in Indonesia, with the brand name simply®. Through a series of market research, tests and product development, simply™ gets a lot of positive response and enthusiasm from consumers and the market. Since July 2017, simply® can already be ordered online.

PT. Duta Abadi Primantara's principle are based on five core values that guide everyone within the company.

We act appropriately and properly with high standard ethic and values.

We foster a culture in which everyone within the organization has a sense of belonging and take the company’s interest at heart.

We strive to be the best in everything we do.

We treat everyone within and in any relation with the organization with mutual respect, regardless of the positions and roles.

We create a motivating and positive working environment that stimulates creativity and productivity throughout the company.

As of today, PT DAP has expanded its wing to outside the nation and reached some neighbor country such as Singapore, Phillipine, Thailand, Vietnam, Malaysia (Kuala Lumpur), and China (ShangHai).

On the same page, the number of our manufacturing factory has also been increased. Not only centered in Jakarta, some of the factories are now also manufacturing in Surabaya, Medan, and Palembang. 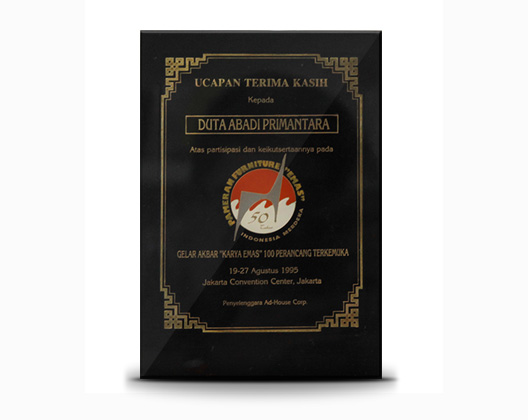 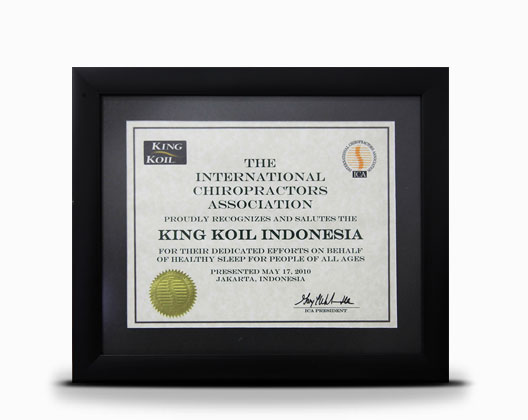 2010 - King Koil® Indonesia was recognized for "Dedicated Effort on Behalf of Healthy Sleep for People of All Ages" by The International Chiropractors Association, May 17th 2010. 2011 - Serta® Singapore was awarded the "Sales & Marketing Excellence Award" by the Serta® International. 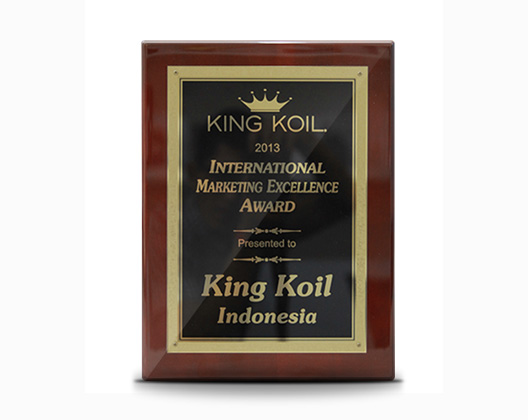 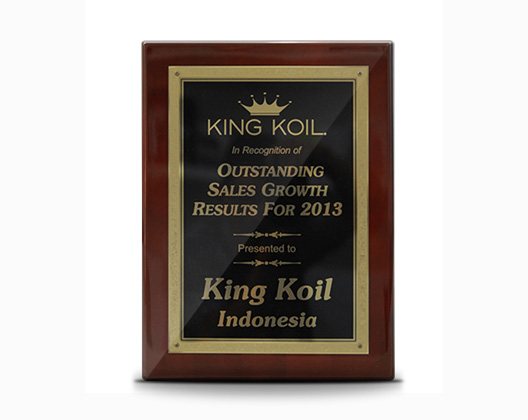 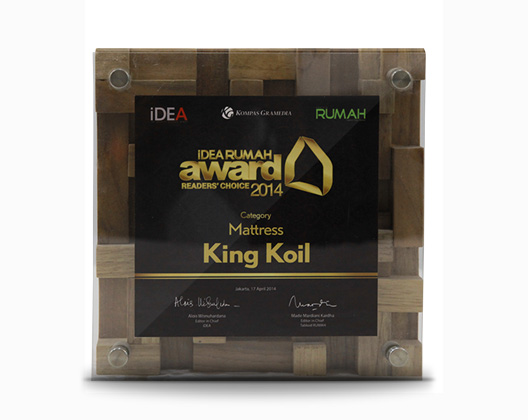 2014 - King Koil® was awarded the "Reader's Choice Award 2014" for the Mattress Category by iDEA, RUMAH, and Kompas Gramedia. 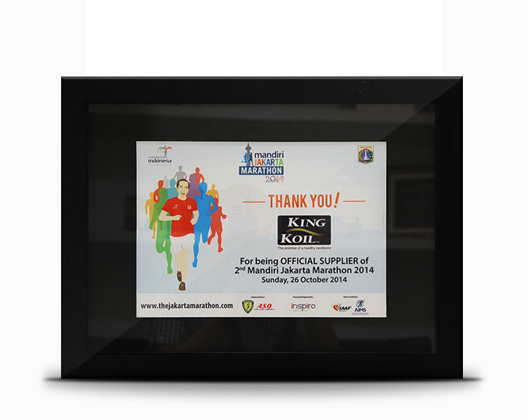 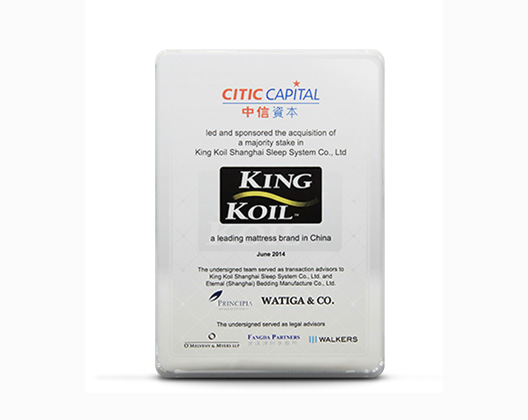 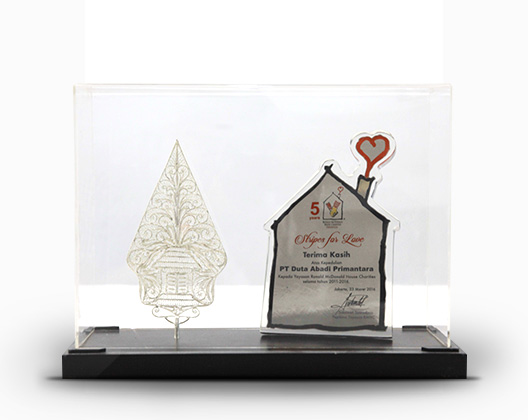 2016 - PT DAP was recognized for contributing to Ronald McDonalds Charity House "Stripes for Love" for 5 straight years from 2011-2016. 2016 - Serta® was recognized as the SPONSORSHIP at "Digital Running for Innovation & Pasar Digital", 30 October 2016. 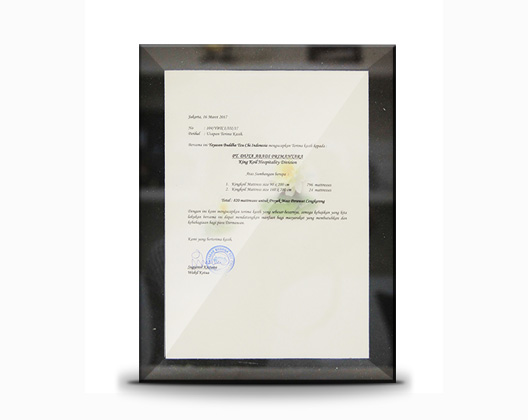 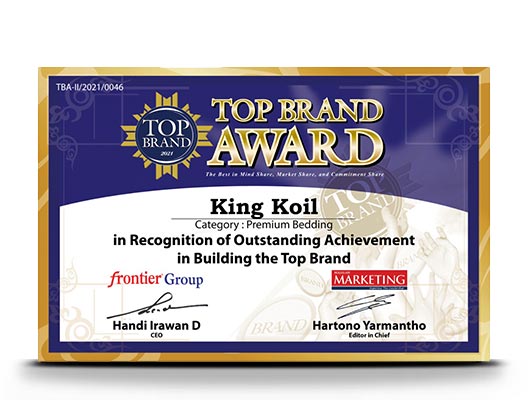 2021 - Serta, through the latest collection of Perfect Sleeper won an award from Infobrand.id and Tras & Co Indonesia as "The First Mattress with Cool Fiber & Anti-Virus (Viro Safe) Technology in Indonesia". 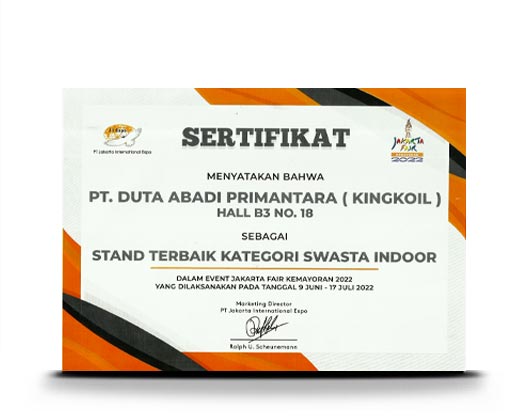 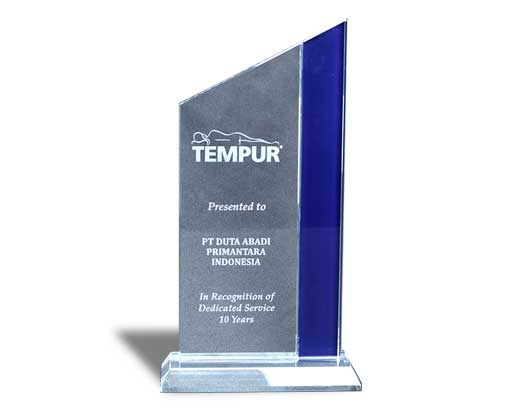 2022 - DAP In Recognition of Dedicated Servie 10 Years, by Tempur Denmark